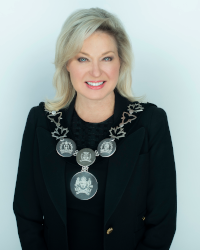 Since first being elected as Mayor in 2014, Bonnie Crombie has worked diligently to improve the quality of life for Mississauga residents by holding the line on taxes, investing in improving traffic congestion, promoting an agenda of sustainability and resiliency, which includes building regionally connected transit , and attracting major economic investment, all while managing the growth of Canada's sixth-largest city. Prior to being elected as Mayor, Bonnie served as the Ward 5 City Councilor, and previous to that, as Member of Parliament for Mississauga-Streetsville. Before entering public service, Mayor Crombie enjoyed a twenty-year career in business, working for Fortune 500 companies and starting his own business as an entrepreneur. Building regionally-integrated transit, keeping Mississauga open for business, fostering innovation and creating a more open, engaging, inclusive, and sustainable city have been Mayor Crombie's leading priorities since taking office. She has an MBA from York University's Schulich School of Business and earned a Corporate Director's Certificate from the Institute of Corporate Directors at the Rotman School of Management. She is proud to have raised three children, Alex, Jonathan and Natasha here in Mississauga.