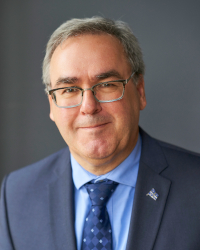 Benoit Breton is an expert in the marketing of Quebec products and services in Western Canada. He has been with the Quebec Office in Toronto for over 26 years and is proud to support his Quebec clients in their business endeavours and in achieving their objectives. His numerous business initiatives have allowed him to develop advanced knowledge of several fields of activity, including transportation, and to build a large network of contacts.

He has also participated in the organization of trade missions to shows and conferences such as: ATMS, APMA, CMTS, ITS and has accompanied hundreds of Quebec companies in their business initiatives.

Benoit is originally from the Beauce region. He started his professional career in the private sector. He has worked for Honeywell, Johnson & Johnson, the Bull Group and Safety Supply. He holds a degree in Arts (Economics) from Glendon University (York) and a degree in Business Administration from UQAM.